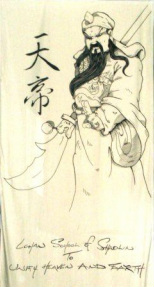 The Spirit of Guan Yu is found in the act of recognizing and then embracing Virtues of the Heart.  There are no established institutions or organizations of this informal lineage.  There only exists the tradition of embodying and exemplifying the Virtues of Courage, Unity, Benevolence, Justice and the numerous other Virtues that the General Guan Yu demonstrated during his lifetime (2 -3rd Century BC, China).

The common pursuit of all martial artists, which include the teaching of 'Tao' or 'Do', are to follow the example set by Guan Yu...also known as the God of War, and to adhere to the principles of a Spiritual Warrior.  These principles are the compliment to the physical training, which most martial artists subjects himself or herself to.

The Lineage of Guan Yu has no family trees showing dates, founders, masters, students and teachers.  It is a Lineage that embraces all the martial arts of Old China and it contains the common goals found in the Principles of The Spiritual Warrior.

Today statues of Guan Yu may be found in most traditional martial arts schools of Old China, Chinese restaurants and businesses throughout the world and he is still revered as the protector of the humble and innocent.  He is also noted to be fond of reading stories to children.